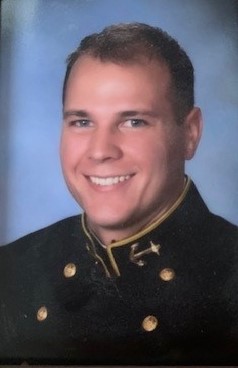 Matt graduated Saline High School in 2008, attended one year at Columbia College Chicago, and enlisted in the U.S. Navy in 2010. He served in the nuclear submarine program until he was accepted into the Naval Academy in 2012. After graduating from the Naval Academy in 2016, he was selected to attend United States Navy Flight School, ultimately becoming an EA-18G Growler pilot based at Naval Air Station Whidbey Island. While based at NAS Whidbey Island, he did a deployment on the USS Theodore Roosevelt, and most recently did operations on the USS Gerald R. Ford.

Matt had many passions, including flying, hiking the Pacific Northwest with his dog, Bo, riding his motorcycle, sailing, music and woodworking. He was admired by many and fiercely loyal to those lucky enough to be his friends. He will be greatly missed by all.

Matt’s memorial service was held at First United Methodist Church in Saline. In lieu of flowers, memorial contributions may be made to the Humane Society of Huron Valley, the American Cancer Society, or the Whidbey Animals Improvement Foundation (waifanimals.org).